– It is not available until further notice –

EVERY DAY IN SEASON – NONSTOP 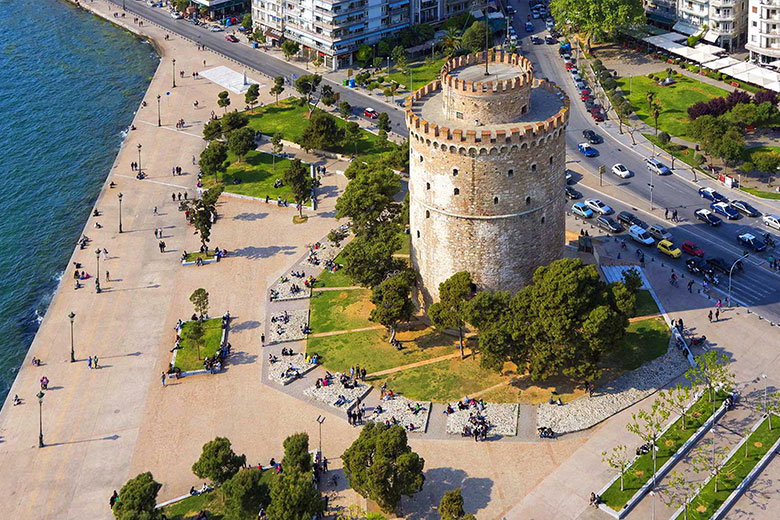 In terms of its size, Thessaloniki is the second city in Greece; the famous harbor, a favored place in which tourists like to relax, drink coffee in the sunny Aristotle Square and enjoy the beautiful city that is abundant in the Roman and Byzantine heritage. This city, worldwide known as Thessaloniki, Salonica or Saloniki, gave Greece its most famous musicians, artists, poets, and thinkers.

What contributes to the modern atmosphere of Thessaloniki are actually the symbols of its magnificent history: from the White Tower among docks, all the way to the Byzantine Walls, right above the Upper Town, named Ano Poli.

Ano Poli, or the Upper Town, represents what is left of Thessaloniki during the Ottoman sovereignty. It also contains some of the oldest and the most significant city churches, which luckily are not damaged in the Great Fire in 1917. The site is listed as one of the UNESCO World Heritage Sites. For traditional looks of the city to be preserved, it is protected by the Government as well. Within its framework, there are nice, traditional, small houses, situated in peaceful alleys, under which many impressive buildings such as: the Church of Hagios Demetrios (which dates back to the 5th century), the Great Roman Rotunda, as well as the Arch of Galerius in Kamara are located.

A large number of the younger population really gives this city a spirited and dynamic atmosphere, which can be felt in the streets and cafés, especially during warm months. Large avenues, parks and squares, as well as the alleys that surround the commercial streets, old houses, neoclassical buildings, stand side by side with the modern residential units and represent one interesting experience to each visitor.

In terms of significance, Thessaloniki is also the second city as the economical, industrial and political center in Greece. As its commercial port is of great significance to Greece, and for Southeastern Europe as well, this city is the main transport hub for the rest of Southeastern Europe, as well. Every year, for the prime minister of Greece, it is very usual to establish political views of the Government or to provide the report of financial and economic achievements in his annual speech on the international Thessaloniki Trade Fair.

When it comes to history, if you arrive from Serbia, you must not miss visiting Zejtinlik, the Serbian military cemetery in Thessaloniki, in which graves of the Serbian, French, Italian, English and Russian soldiers, who were killed in combats and the breach of Salonica Front during the First World War, are located. Thessaloniki really contains a large number of landmarks, which gives the city special charm and contributes to its unique image that attracts tourists. Above all, those are: The White Tower – the symbol of Thessaloniki, the Byzantine Town Walls, the traditional Greek architecture, the Thessaloniki coastal area with interesting and nice cafés, stores and much more.

On the other hand, it is known that Greece lives 24 hours a day, with no interruptions, during the season in summer, as well as for the rest of year. The Greeks are simply fond of the nightlife. People go out during the whole week and the streets are effervescent long after midnight has passed. The working hours of cafés stretch to 3 AM, and on weekends – by morning. An evening out begins by gathering at a café, with a drink (coffee is not served after 9 PM anymore). Classic cafés are predominant, but there are also places where a café, a club and a restaurant are all in one place at the same time.

An evening at the discotheque begins with the electronic music, but in the later hours, the Greek music is present, with obligatory Zeibekika or Ciftetelija dance and sfinaki shots. The nightlife in Greece is actually much richer than daily life and the Greeks would not want to deprive themselves of that.

Then again, even though it is famous for its characteristic nightlife and sightseeing, Thessaloniki possesses some of the most beautiful beaches in all over Greece, such as: Perea, Agia Triada, Epanomi, etc. There are too many tourist attractions in Thessaloniki to be listed, but for what is worth, Thessaloniki itself is an amazingly attractive tourist destination. Thessaloniki has the Mediterranean, as well as a Continental climate. Thessaloniki summers are very humid at night, but not too warm, hence the very pleasantness at night and maximum temperatures exceed 30° C, but they rarely exceed 40° C.

The tourists from Serbia, as they say, are very comfortable with this climate and that is the reason for Thessaloniki beaches to be obligatory destination, if not during the whole vacation, then at least as a pit stop.

We have daily minibus transfer: Belgrade – Thessaloniki. We have several departures every day, in both directions. Our vehicle comes to pick you up – from any address in Belgrade.

The phone numbers for the reservation to Thessaloniki (and vice versa, from Thessaloniki to Belgrade), can be found via our website page CONTACT. We work 24 hours a day, 365 days within the year. Reservations can be made via e-mail, also via our CONTACT page.